Photo: Badger Ridge Trail at Hitchcock Nature Center
Overview
Welcome to Pottawattamie County, home to Council Bluffs. Centrally located in the Loess Hills, Council Bluffs was called Kanesville when Mormons stopped here on their way west in the 1840's. In 1853, as hundreds of thousands of gold rushers and pioneers later made the city a crossroads to the west, it was renamed Council Bluffs, reflecting the title given the region by Lewis and Clark in 1804.

Pottawattamie County is also home to the Hitchcock Excursion Loop, which is a 40 minute loop off of the Byway Spine.

There are many sites to see in Pottawattamie County. Be sure to check the Events listings for information on many different places to stop.

Directions
Enter northern Pottawattamie County on County Road L34 which passes under I-880 and continues south with horizon-to-horizon views of farm fields that seem to roll away from the Byway.

Nearly 14 miles later, when the Byway meets County Road G81, you should turn right (south) to follow that for 3.5 miles to U.S. 6 which leads to Council Bluffs.

At U.S. 6, turn right (east) to go to South 7th Street (Iowa Highway 192), a one-way street going south to the South Expressway which passes under I-20/80 to meet the South Omaha Bridge Road, 3 miles later.

At the South Omaha Bridge Road (also called Iowa Highway 92), you turn left (east) to pass over I-29 and then, less than 2 miles after leaving the South Expressway, meet Harry Langdon Boulevard.

At Harry Langdon Boulevard, turn right (south). On your left is the Iowa School for the Deaf. Shortly afterward, the boulevard becomes Wabash Avenue, and then County Road L35, for just more than 6 miles, leads you along the base of the Hills and sometimes rides high enough on their flanks to provide vistas of the Missouri River Valley before you exit Pottawattamie County.


Attractions
​Visit our page on Travel Iowa's website to learn more about attractions and amenities in Pottawattamie County.

Communities along the byway in Pottawattamie County include:

Lewis & Clark Monument Park
19962 Monument Rd, Council Bluffs
Maintained by City of Council Bluffs, this park includes a monument to Lewis & Clark overlooking the Missouri River. The park includes several miles for hiking and mountain biking.
Fairmount Park
Fairmount Park Road, Council Bluffs
Fairmount Park is a city park located in the middle of Council Bluffs in the Loess Hills.
Vincent Bluff Preserve
Thallas Street, Council Bluffs
Vincent Bluff Prairie Preserve is a cooperative venture between the City of Council Bluffs, Iowa Natural Heritage Foundation and the LHPS to preserve a unique urban prairie in the Loess Hills Landform. The preserve is located in the heart of Council Bluffs; the City owns the land. The Iowa Natural Heritage Foundation was the vehicle through which primary acquisition of the property was made possible. LHPS, through an agreement with the City of Council Bluffs, provides for the management and restoration of the preserve. Numerous other sponsors, volunteers and organizations worked to make the project come to fruition as well.
Today, Vincent Bluff Prairie Preserve stands as the only truly urban prairie preserve in the State of Iowa, and likewise, is a great example of Loess Hills prairie, oak savanna, and eastern deciduous forest ecosystems. The fact that this nearly pristine landscape exists in the heart of a metropolitan area of nearly 1 million residents speaks of the resiliency of prairie and the ruggedness of the Loess Hills.

Hitchcock Nature Center
27792 Ski Hill Loop, Honey Creek
About 5 miles north of Crescent, a 1,003-acre preserve that includes the Loess Hills Lodge, an interpretive facility with exhibits and programs, prairie and woodland trails, handicapped-accessible boardwalk, cabins and campsites. An observation tower with a 360-degree view of the Loess Hills is rated as one of the best Hawk Watch stations in North America for viewing different species each fall. ​ 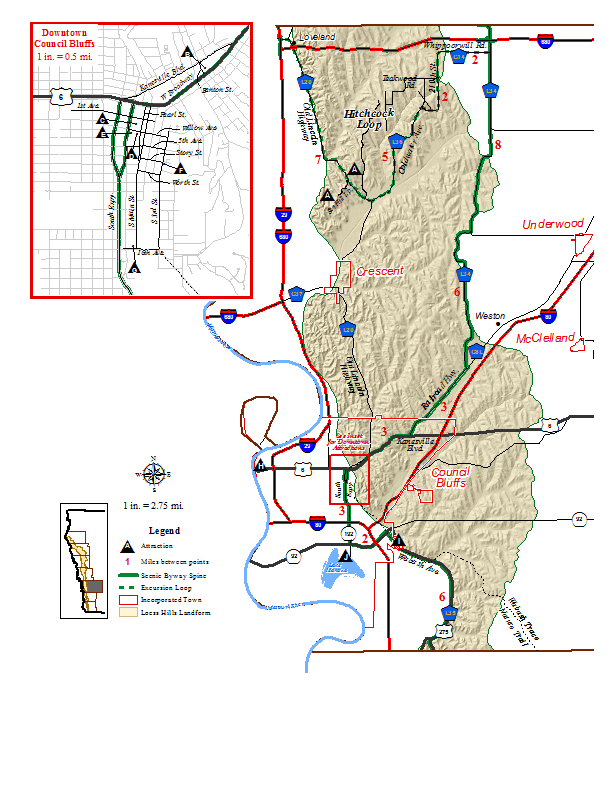