Directions
Enter Monona County  from the north on County Road L12 from Smithland.  About 5 miles after leaving Smithland, turn left (east) at 133rd St., which is also County Road E16, to cross the floodplain of the Little Sioux River and enter the Hills just east of the river.

After being on 133rd St. for just under 3 miles, turn right (south) onto County Road L20 to ramble through more Hills until you're east of them, going south to Castana, 8 miles later.

As you approach Castana, turn right (south) onto Iowa Highway 175 to follow the MapleRiver valley toward Turin.

In Moorhead, home of the Loess Hills Hospitality Association, you will see Iowa Highway 183.  Turn right (southeast) to take that highway down the SoldierRiver valley to the county's southern border, 5 miles away.

Wilderness Loop
You travel on paved and gravel roads on this 13-mile loop which begins by continuing to go south on County Road L12 after the Byway Spine turns off at County Road E16. This passes between two spurs of the Loess Hills and across the valley of the Little Sioux River.

About two miles later on Nutmeg Avenue is its junction with Oak Avenue which goes both to the right (southeast) and straight ahead (northeast); go straight ahead.

Allow about 30 minutes to drive this loop.

Larpenteur Memorial Road Connection
You take paved County Road L14 all the way on this 5.5 mile route that begins at the junction of L14 and L12 and follows the base of the Hills south to Turin. Small parking lots serve as trailheads.

Allow about 15 minutes for this route.

At Turin, either turn left (east) onto Iowa Highway 175/37 to rejoin the Byway Spine east of town or continue south on County Road L14 which starts Preparation Loop.

Preparation Loop
This 15-mile loop heads south from Turin for about 9 miles along the base of the Hills on County Road L14 (also called Larpenteur Memorial Road) and turning left (east) onto County Road E60 which lifts you up into the Hills.

Less than 3/4-mile later is a Y-intersection where 314th Street turns right (east) and leads to Preparation Canyon State Park 1 mile later. At the entry to the park, though, if you turn left (north), 314th Street will lead you to Iowa Highway 183, the spine of the Byway.

NOTE: If you turn left (west) at the intersection of Oak Avenue and 314th Street, you will find the Loess Hills State Forest Overlook, a wooded platform atop one of the hills. Trails lead from the overlook into state-owned land.

Allow 30 minutes for this drive on paved and gravel roads.

Attractions
Visit our page on Travel Iowa's website to learn more about attractions and amenities in Monona County.

Communities along the byway in Monona County include:
​Hiking

Whiting Woods
14858 Peach Avenue, Mapleton, IA 51034
This 80-acre tract of dense native timber is located 4 miles southwest of Mapleton.  Approximately 10 acres have been developed for picnicking, hiking and nature studies. a 1.6 mile trail that takes you around the whole timber, with four benches for stopping and relaxing along the way.  An open shelter house, drinking water and vault type toilet facilities are available.  Upright/ground grills and picnic tables are also available.

​Loess Hills State Forest - Preparation Canyon Unit
north of Pisgah
The Preparation Canyon Unit of the Loess Hills State Forest consists of 4,125 acres located north of the Pisgah. This unit has a small lake with good fishing. An overlook provides visitors with a spectacular view of the forest, prairies, Missouri River valley, and Nebraska.
Preparation Canyon State Park
north of Pisgah
Preparation Canyon State Park 344-acre park has hiking trails and nine backpack campsites. It is located 5 miles southwest of Moorhead and 5 miles north of Pisgah, Iowa. A group of Mormons rested here in 1853 to prepare for continuing their journey to Utah, but they left the church to follow a charismatic leader who they later discovered was a swindler.
Loess Hills Wildlife Area/Turin Loess Hills Nature Preserve/Sy Runkel State Preserve
north of Turin
Turin Loess Hills State Preserve is a 220-acre area featuring a rugged Loess Hills landscape with an abrupt west-facing ridge. It is located in the southern unit of the 3,000-acre Loess Hills Wildlife Area, 2 miles north of Turin and 7.5 miles east of Onawa in Monona County. The Iowa Conservation Commission purchased the area in 1974. In 1978, the area was dedicated as a biological and geological state preserve and became part of a National Natural Landmark in 1986.

Sylvan Runkel State Preserve is a 330-acre preserve containing an outstanding example of Iowa’s Loess Hills landscape, with extensive native prairie covering steep hills. The tracts comprising the preserve were acquired by the Iowa Conservation Commission in 1973 and 1980 as part of the 3,000-acre Loess Hills Wildlife Area. In 1985, the Loess Hills Wildlife Area (including the preserve area) became part of a 10,420-acre National Natural Landmark. In 1996, the preserve was established for its biological and geological significance, and named in memory of Sylvan Runkel.

Some hiking trails begin at parking lots located on 178th Street and Oak Avenue, Turin. Also, this region is where the annual Loess Hills Seminar is hosted by the Northwest Area Education Agency on the weekend following the Memorial Day weekend.
​
​
Biking
Several on-road routes are available through the Loess Hills in Monona County. 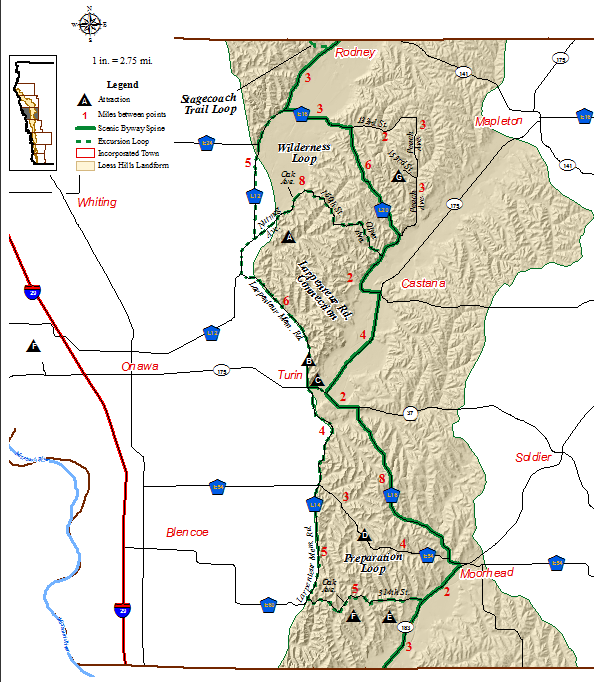